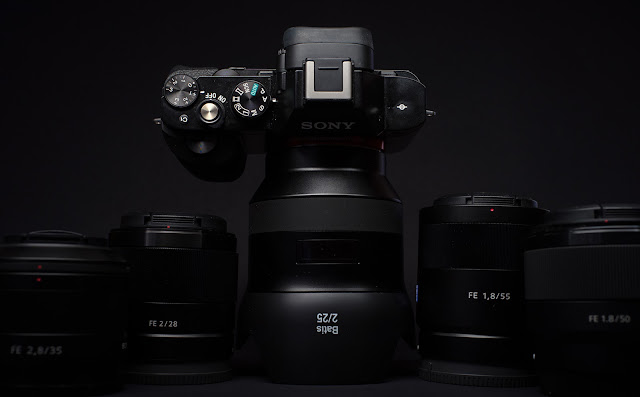 Here I will test five native FE mount (full-frame) Sony prime lenses in infrared. Comparing a normal 720nm filter (external) - on a full spectrum Sony A7 against Kolari's new AR (Anti-Reflective Coating) 720nm converted Sony A7. The idea here is to show how each lens copes with IR hot spots on each camera and ultimately how much difference the AR coated filter makes.

Here are the rules that I follow to make consistent 'Hot Spot' tests for each lens (please feel free to follow these if you want to test your own lenses and find this useful):


NOTES - CAMERA SETTINGS & EQUIPMENT
I tend to use 'Aperture Priority' mode, with 'Auto ISO' on so that the camera balances out all the exposures equally, but vignetting will make the histogram look darker at the larger apertures. There is not much you can do about this. Unfortunately because Kolari conversion also has 'Thin Filter', to fix the vignetting the two exposures can look quite different at the wider aperture settings (generally disappears by f/4 - f/5.6). For this test please try to ignore the vignetting differences.

The hot spot intensity is relative to the amount of bright foliage in the scene, so slight changes in position could make this intensity fluctuate. For this reason I have started to use a tripod to reduce the chances of this issue effecting the results. Since I was using a tripod here I could have turned off the 'Auto ISO' setting, but I kept it on here because I didn't have a remote trigger (timer would have taken too long) and I was concerned about camera shake. This shouldn't have worried me for hot spot testing, but at some point I would like to go back and test the full resolution files for sharpness as well.

I also tested every camera and lens, at every full aperture with the external B+W 093 (830nm) IR filter - with MRC coatings. You won't see the result of this today because I'm still processing them, but this could also be an interesting set of results to test and compare for hot spot performance and centre / corner sharpness.

NOTES - WEATHER
We don't get a lot of 'great' weather here in the UK, so when I saw some coming up I jumped at the chance to do this comparison. It turned out to be the hottest day in July recorded in a long time. The term "freakishly good" seems to best describe it. Not only was there no clouds in the sky, but even the horizon was extremely clear. Even when I don't have a horrible cold I hate this weather, but I did it for science :P

NOTES - HOW TO READ THE RESULTS
For each batch of images the normal filter is on the left and the Kolari is on the right. The initial sample photos were taken quite early (2 hours after sunrise), so I decided to repeat the tests while the sun was higher (4 hours before sunset). I'm pretty sure that the different foliage in the frame will be the biggest difference to hot spot performance (not time of day), but I will include both sets here the purposes of averaging and to perhaps help show how consistent this test can be. 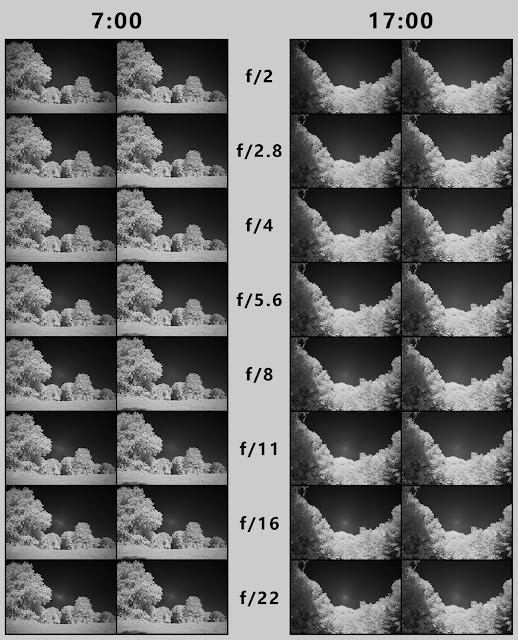 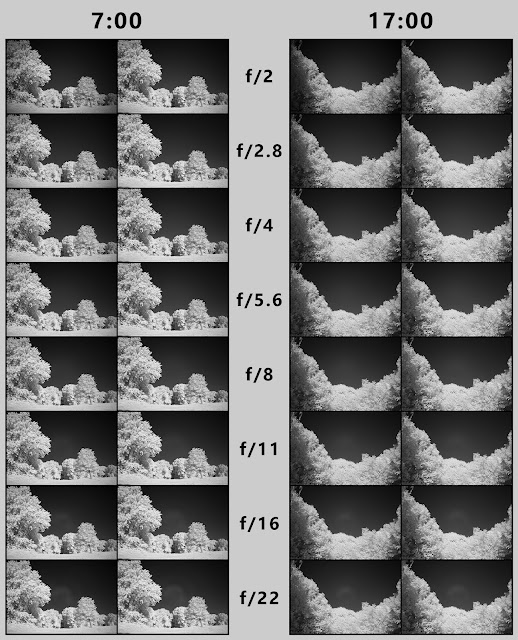 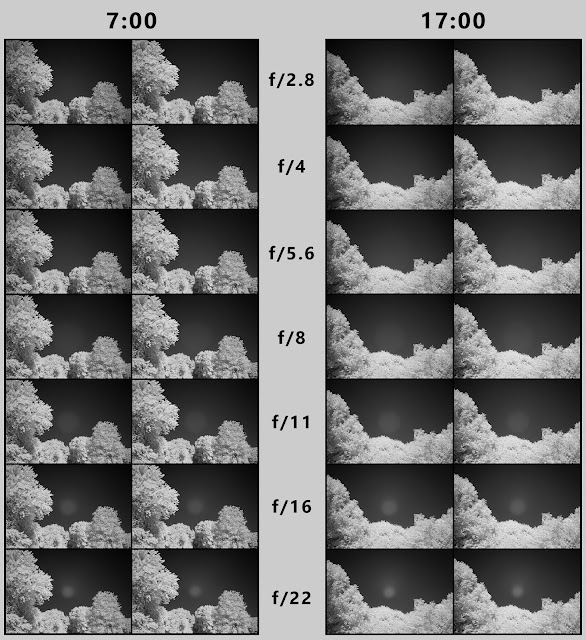 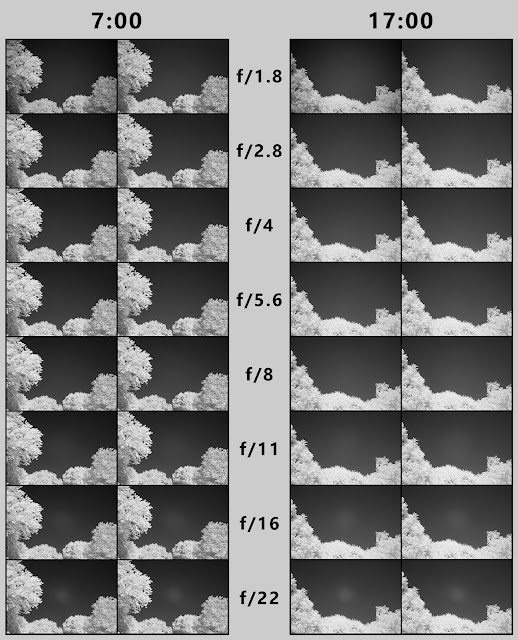 The elephant in the room at this point is that these results seems to be showing quite a small difference in the AR coated conversion. I'm not totally sure why this is. Perhaps it's the extremely clear conditions. This is another reason why I ran the test twice, later in the day. I will continue to do these tests and perhaps I will make a second test in overcast conditions to back up these findings, but that will be a bit more tricky to unify. If anyone has any thoughts on these results or how else I could test in the future please feel free to post a comment below.

For now I will concentrate on the lens results...

The 25mm and 35mm Zeiss lenses pretty much need to be shot at f/4 to avoid issues and even then you will get some in extreme cases. It's rather frustrating that decent wide angle lenses from Sony perform so badly in IR. It's not only Sony lenses that have this issue, but with Sony trying to find a high quality wide lens with AF seems almost impossible. I have briefly tried the 16-35 f/4 zoom from Sony and it too suffers quite badly (somewhere between the amount of the 25mm and 35mm Zeiss lenses).

The 28mm lens really isn't too bad. f/8 and even f/11 it's generally quite reliable in 720nm. It's not what I would call a stellar lens in general, but for it's speed and quality I'd say it's decent value. Considering its IR performance it's an easy option for any Sony A7 photographers who wants a small AF wide lens to also shoot IR. The fact that it shares the same filter size as the 50/1.8 and 55/1.8 make a great option for full spectrum shooters who want to keep their filters to a minimum and camera bags small.

The Sony/Zeiss 55mm is still the best performing IR lens I've found in the Sony line-up. I really hope that I can find more lenses like this for the Sony in the near future, but at the moment it looks like an anomaly. The fact that it's one of the nicest lenses I've used period makes it a bargain for any IR shooter.
The only slight artifact (a bright ring at f/22 when over exposing) is probably never going to cause anyone any annoyance. What's more interesting about that here is that it is clearly not coming from the use of external filters and if anything looks slightly worse on the AR coated conversion.

The new 50mm Sony lens did OK, although this test shows up the issue way better than anything I've seen before and better represents what I was seeing through the lens in general lighting conditions.
Posted by Edd at 06:58 6 comments: