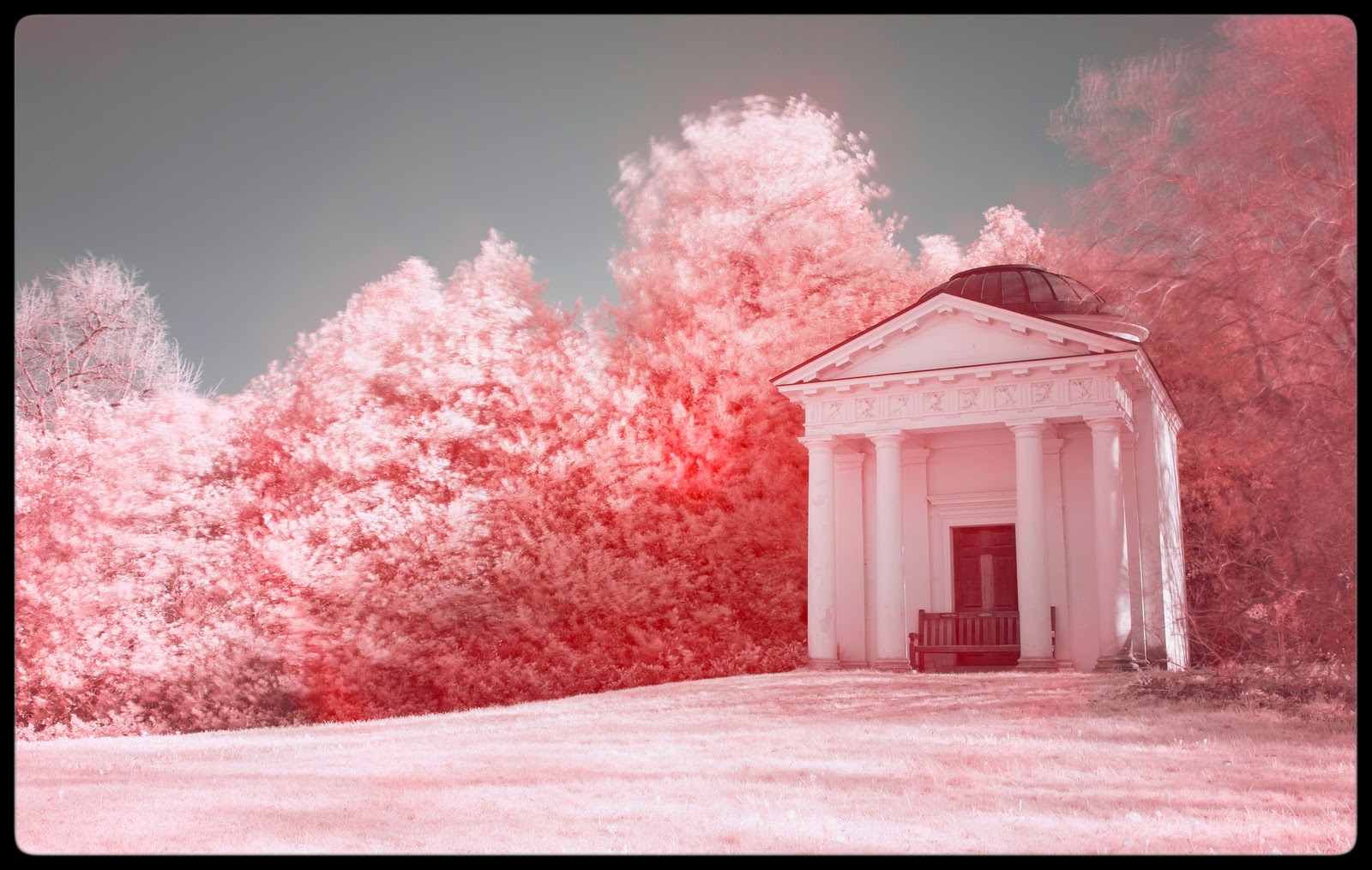 It's time for the next chapter in my infra-red camera history...

A couple of years after selling my infra-red converted Canon 40D (2008) I noticed a sharp drop off in picture taking as a whole. The main reason for this was that my remaining DSLR was a pro model and thus too big and heavy to carry around everywhere. Something needed to be done to rekindle my passion for photography, so I started to look for something more compact. I wanted to keep the really high image quality and good manual controls, just lose all the bulk.

I'd followed the Fuji X100 from its announcement. I loved the looks and features, but initially dismissed it because of a relatively high price and a couple of feature niggles. A year on and the price dropped drastically however. It was then available for around half the original asking price on Fuji's refurbished website. I couldn't ignore it any more, so I finally bought one and boy was I not disappointed.

Controls - The Way They Were Meant To Be
It might look like a hipster's wet dream (well from the front anyway), but the retro dials are even more amazing to use than they are to look at. Apart from some fiddly iso controls (an auto iso toggle button would have been perfect) it's an extremely easy camera to use. The image quality produced by the sensor is superb for such a small camera. The clever optical and electronic viewfinder are large and very well implemented, but more on that in a minute. The effective 35mm prime lens is incredibly small, great in low light and has very decent image quality. I already love prime lenses, but if you're not concerned about the possible inflexibility I strongly advise you reconsider. 35mm is good for most 'normal' photography and a pretty great angle to be stuck with while travelling, just check out some samples from the X100.

Killer Feature
Well, I could go on about Fuji and the X100 for ages, but "what has this got to do with infra-red?" I hear you ask. Well, unlike most modern cameras, the X100's internal UV/IR cut filter is not particularly aggressive - about 11 stops. OK, so that's not exactly subtle either, but some of the X100's other features step up to make it a viable hand-held infra-red camera. The wide aperture lens and great high iso performance from the APS-C sensor push the exposures back into an acceptable range. The first image that I posted above was taken on a tripod, which is all well and good, but let's prove the hand-held shooting ability of the X100...

This infra-red photo was taken under the canopy of trees. This was a hand-held shot of a moving subject. It's not the best example of an infra-red image, since none of the cat's tones look any different to colour, but it does help illustrate the camera's potential. This image is a little noisy, but considering the camera is fairly new, not converted and the conditions for the photo are mildly tricky this is pretty impressive.

All this adds up to a camera that can shoot infra-red images without the need of a costly and damaging conversion. Not that it's possible, I actually tried once. On that note I think it would be a fantastic idea to have the camera as 'full-spectrum', using the internal ND filter as the UV/IR cut filter and then external filters could be used for really high quality, fast infra-red photography. This would barely affect the camera's normal colour abilities and could and would make for one heck of an IR camera!

What To Buy & How Much
The official 49mm Hoya R72 filter is normally priced around £50, but you can save quite a bit by shopping around, buying second hand, or getting a generic one. To attach the 49mm filter to the X100 you will also need the lens hood adapter. The official one of those is about £70, but again there are third-party ones costing much less. I think I spent £22 on my IR set up for the X100, so if you own this camera and you haven't tried out infra-red photography yet what are you waiting for?!

Viewfinders (Optical and Electronic)
The X100's mix of display types compliment it's IR abilities nicely. The option of having both optical and electronic viewfinders normally useful, but for shooting infra-red it's a huge advantage. Because the optical viewfinder (OVF) doesn't look through the lens (like an SLR), it can still be used while shooting in infra-red. The added bonus is that the electronic viewfinder (EVF) works reasonably well when shooting in IR too. Since the camera is having to boost exposure for IR the frame-rate of the EVF does suffer, but it still works well enough. Actually shooting with the EVF is advised for focusing reasons and this is not restricted to infra-red shooting. Sometimes the X100 misses focus, but acts like it's locked, so when looking through the OVF there is no feedback to tell you something's wrong.

Game Changer
The real benefit to the EVF here is that it shows you a real-time view of the world in infra-red. This is brilliant for a number of reasons. Unlike an SLR you don't have to guess what your tones and colours look like. It makes composing a scene much easier and it looks great.

OK so an EVF is the same view you get on the back screen, or live-view on a DSLR. The problem with those is that they can't easily be seen in bright sunlight and it's these conditions that you'll need to be shooting in to get hand-held infra-red photos from a non-converted camera.

Significant Limitations?
The X100 is very usable for hand-held infra-red shooting in great weather, but take away the perfect sun and it gets depressing quickly. Dark scenes will almost certainly cause the camera's focusing to fail, but is this all bad? I mean infra-red tends to only look great in bright sunshine anyway. I wouldn't recommend shooting infra-red indoors mostly because those images are boring anyway. High levels of noise or slow shutter speeds (take your pick) will just guarantee your images will suck, but they were going to anyway so who cares.

When trying to limit the noise levels of your hand-held IR images, on the X100 you'll be stuck using the widest apertures available. I suggest locking the aperture at F/2, but what about the IR focus issues? Fear not, here is another feather in the X100's infra-red cap. Although it uses the slower contrast detect AF (unlike the X100S), this guarantees accurate AF in whichever wavelength you shoot and this makes wide apertures a non issue.

So there you have it. Not the worst limitations in the world, especially when you consider that the X100 was never built to be an infra-red camera.

Tripod shooting
Exposure wise you won't have much room to move when shooting hand-held, but you can of course still use a tripod if you so desire. This makes interior, low-light or base iso infra-red shots at least possible.

At base iso and stopped down to decent apertures, the X100's exposures may be too long for hand-held shooting, but for cool effects (like moving water) they're just long enough without becoming too annoying.

The main benefit to base iso is low noise levels and this makes colours infinitely more pliable when pushing their channels around. The above image was processed using the false-colour technique (red/blue channel swap). It was then pushed further still to achieve this orange/pinky cast. A hand-held shot at high iso will become undesirably grainy if processed the same way. To that end I also recommend shooting RAW when taking infra-red shots, even if you normally don't. 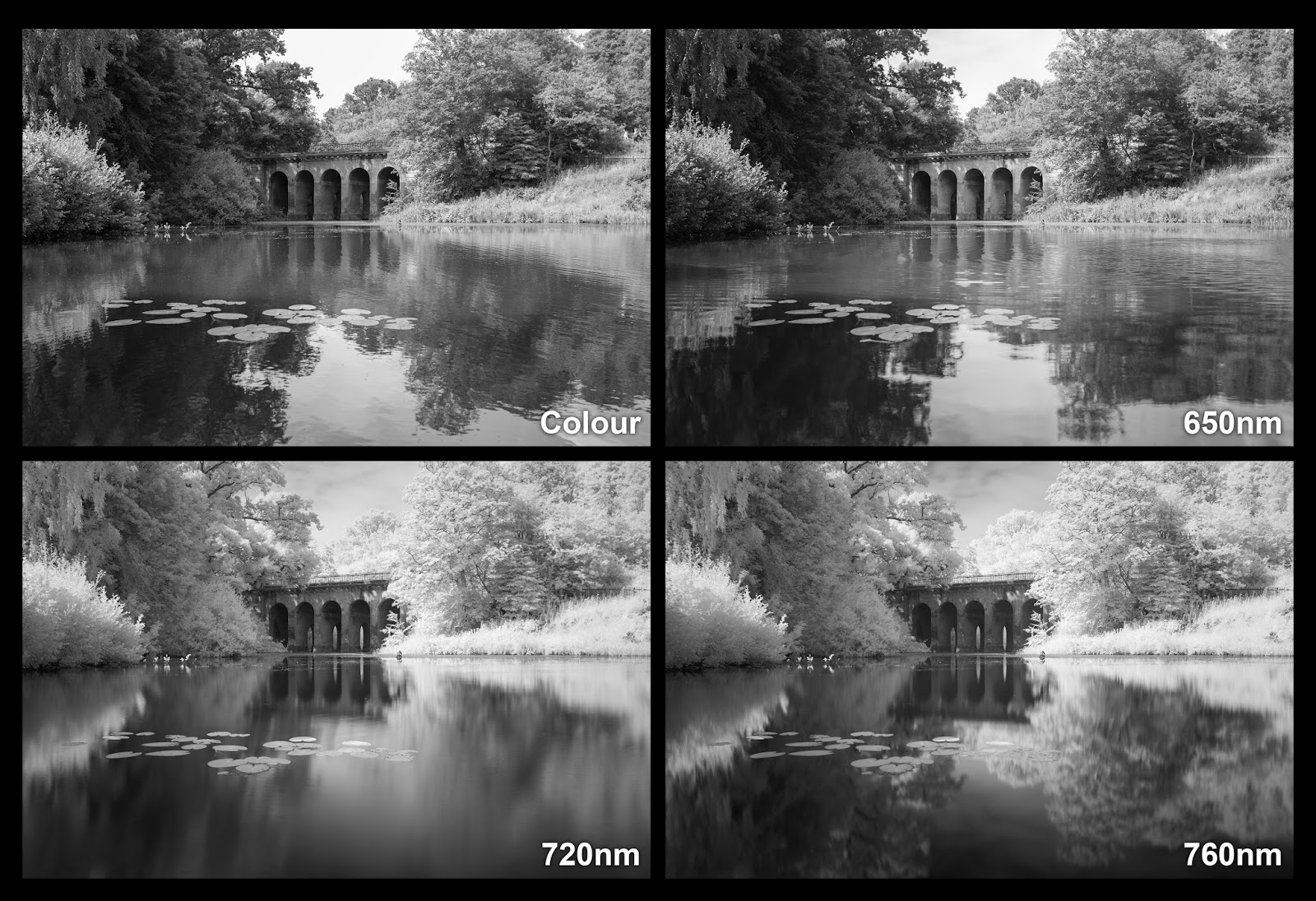 Here are some comparisons between different filters used on the X100. The top left image was taken without a filter and simply turned black and white in the RAW editor by reducing saturation. All shots were taken on a tripod so they could all be base iso. Here are some of my observations:

650nm (Cheap, Generic)
This filter really did nothing. I'm not sure weather it was a dodgy filter (I don't think so), or that the camera would need to be converted to get the most out of this wavelength. I've seen some interesting effects from cameras using this wavelength, but i think they all had their internal UV'IR filters removed.

720nm (Hoya R72)
This is the common Hoya R72 filter. It's great for colour and black & white shots and is what I use 99% of time on the X100. There's not much to say here accept that it works well. This is the wavelength I would recommend for anyone trying infra-red photography. It's possibly the only one you will ever need.

760nm (Cheap, Generic)
This eliminates any colour effect from the infra-red image. Not that we're showing colour here anyway, this is all about tone. In theory the higher cut off point of the wavelength can produce more contrast, but this is so minimal that it's something you can push equally in post process. It doesn't negatively effect exposures much, but it just doesn't provide much of a difference either. The difference you see in the water are due to a duck swimming past in one shot, but not the other. The only thing that makes me thing there's a difference is the brighter tree in the middle of the photo. Still, I wouldn't bother with this filter unless you just see no point in colour IR. If you feel the need for greater contrast then I'd suggest going higher still. The 830nm (ish) B+W 093 filter will almost certainly still provide something, but much higher than that could provide nothing at all on a non-converted camera like this. 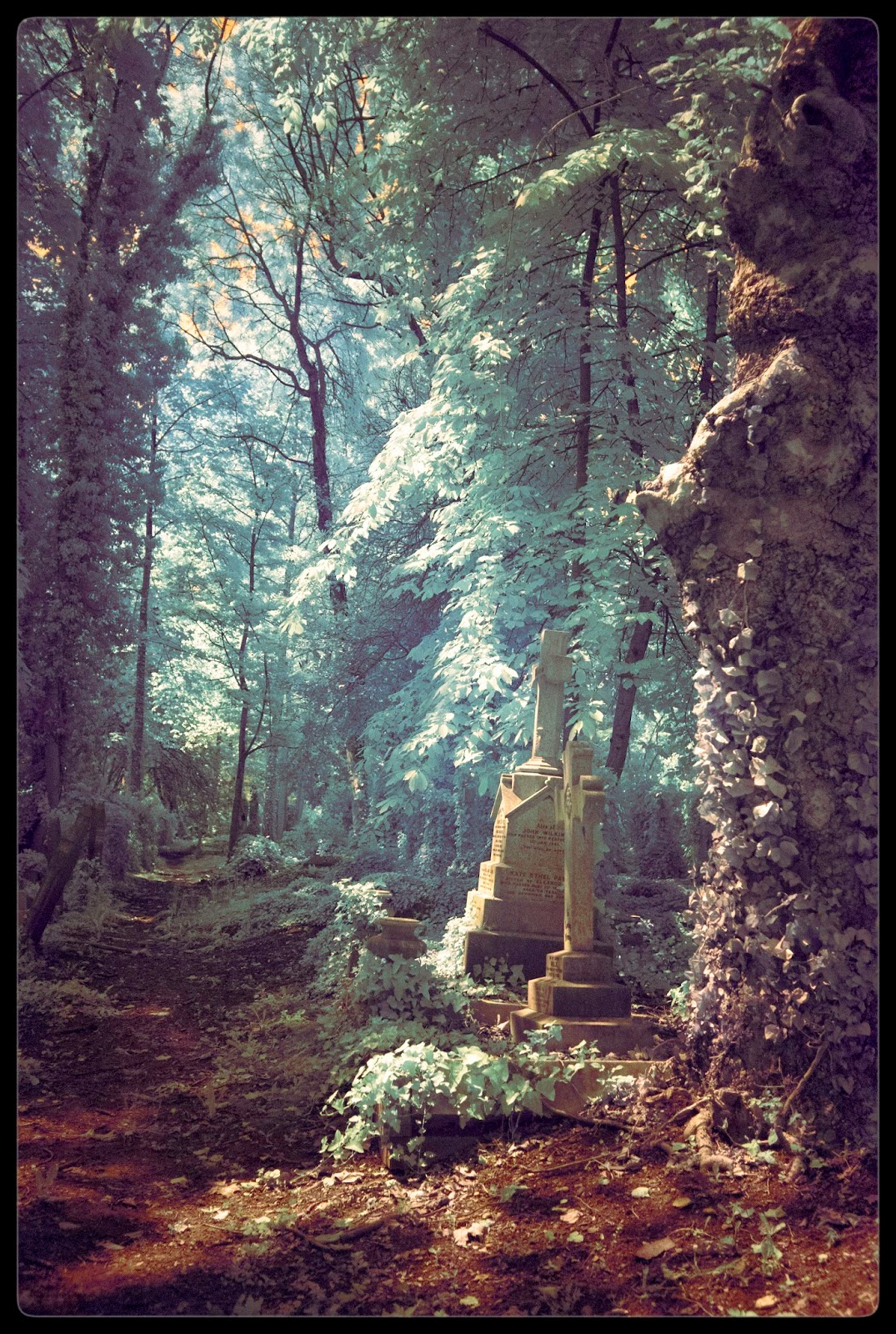 This image was taken by a friend who bought the Fuji X100 at a similar time. He used a third party filter here. It was rated at 720nm, but seems to let give slightly faster exposures so perhaps it cuts off  little lower down the spectrum (perhaps 700nm). These rather fetching colours come more from Sam's processing than the filter's character. It shows how much can be done with processing. I will go over some different image manipulation workflows in later posts. 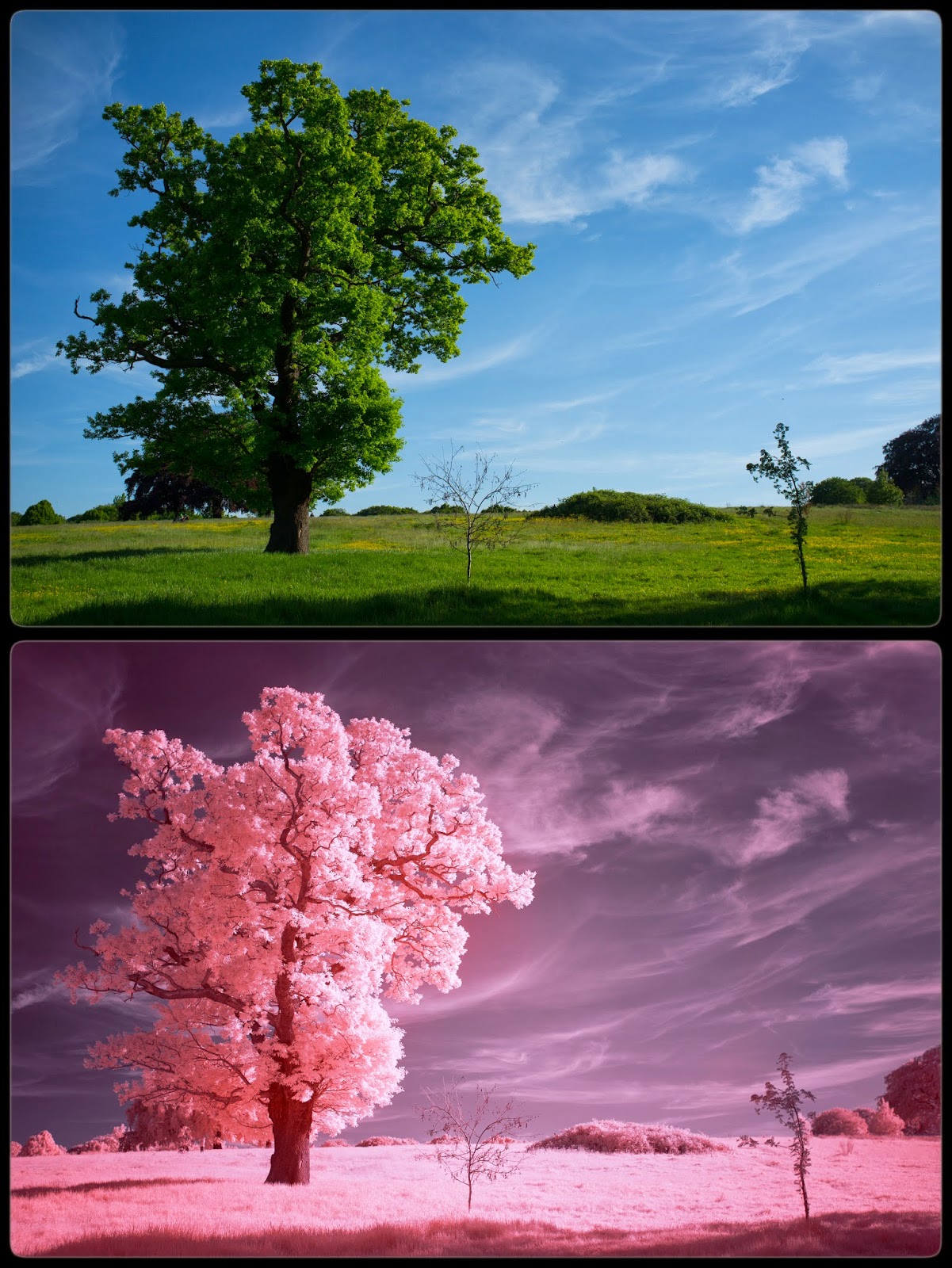 Having a camera that can shoot colour and IR is great in harsh / bright conditions. When normal colour images tend to get killed by overly contrasty tones IR can keep things much more grounded. Although the highlights still blow out and flaring can be a real issue there is simply something very pleasing about the dynamic range of a sunny infra-red photo. The flexibility of the X100 helps to keep me motivated through periods where my passion would otherwise fall. 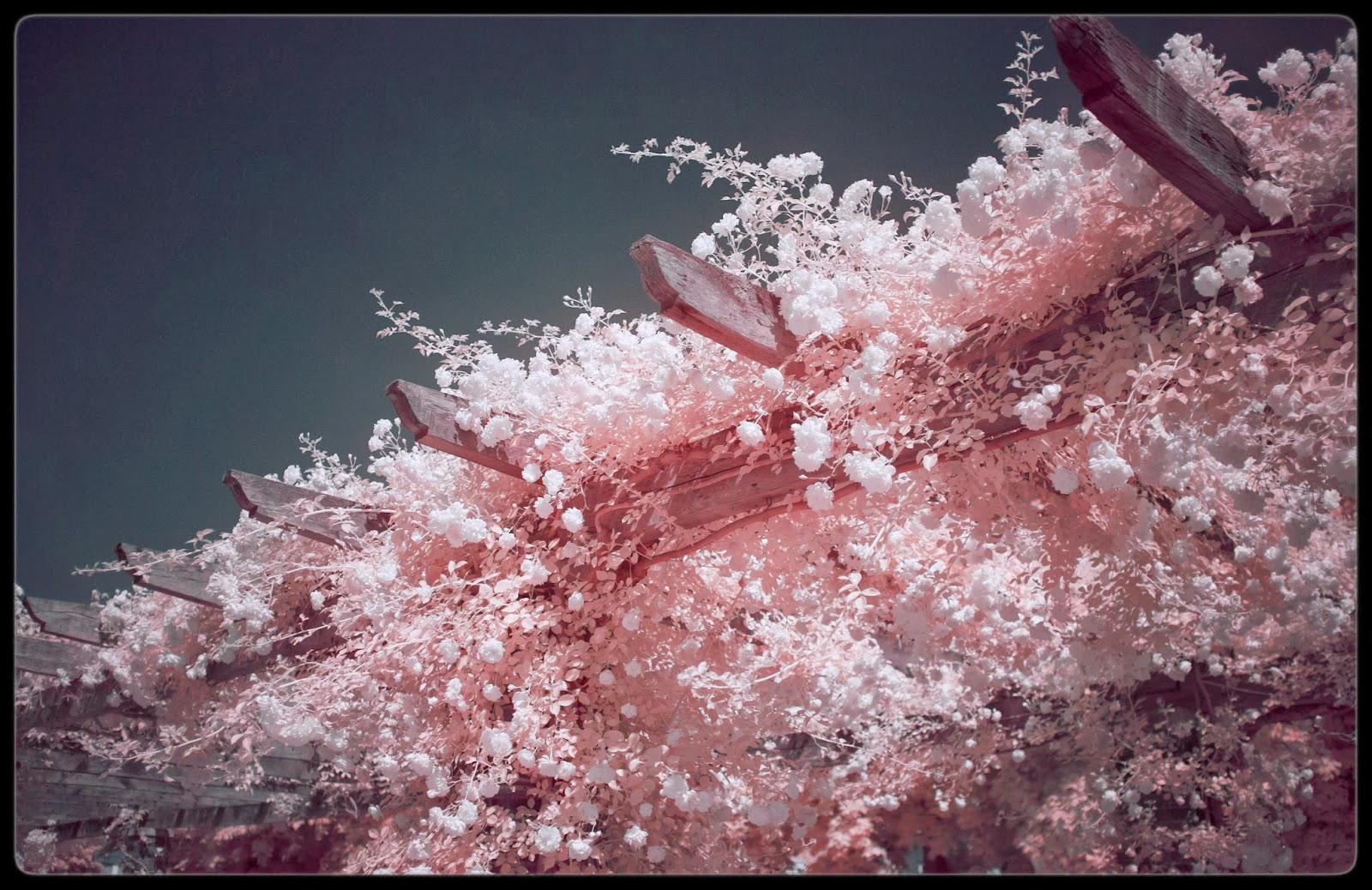 Conclusion
I absolutely love the Fuji X100. The manual dials make it the nicest camera I've used so far. As an infra-red camera it is truly amazing and this is out of the box. Not needing converting means that it provides a nice jumping off point for existing X100 owners to play with infra-red for very little money. That's a rare and amazing thing. This camera has made me realise the power of the EVF, which can be used for colour and IR equally well.

I'm not sure exactly how good the X100s is for infra-red, but the internal filter seems to block about the same amount of IR light from looking on Flickr images. Although the phase detect auto-focus could cause issues with infra-red it seems to do OK. One thing is for sure and that's the improved high iso performance is nice.
Posted by Edd at 12:39